The store will not work correctly in the case when cookies are disabled.

How to Reduce Fluoride and Pesticides from Tap Water

When city water gets treated, chemicals like chlorine and fluoride would be added to the water to remove bacterial and other water contaminants. Though the amount of those chemicals added is under strict regulations, chemical residues can still affect our health in the long run.
Apart from the chemical leftovers, the pesticide from farmland is another significant contaminant for tap water. The use of pesticides and fertilizers benefit U.S. agriculture in a great sense, but it also brings great concerns regarding the potential adverse effects on the environment and human health. Even with city water treatment, trace pesticides can still be present in the tap water and cause health problems.
This article would explain the negative effects of fluoride and pesticides in drinking water as well as solutions to reduce those contaminants at home.

Fluorine can be naturally found in soil, which constitutes 0.08% of the Earth crust, also the world's 13th most abundant element. Fluorides are compounds that combine the element fluorine with another substance. The industrial use of inorganic fluorine applies to a great number of purposes.
When combined with metal, fluorides are often used in aluminum production or as a flux in steel industries. Other applications like phosphate fertilizers, tiles, and ceramics also contain fluorine that can be leached to the environment.
Depending on the local water source and conditions, the levels of fluoride in natural drinking water vary. The higher concentration of fluoride is often associated with underground sources. For example, areas that are rich in fluoride-containing minerals, the well water could carry up to 10mg of fluoride per litre. The highest natural level reported is 2800 mg/litre.
The water authorities in the U.S. have been adding fluoride to the city municipal water since 1945, after scientific studies showed that people living in higher water fluoride level areas had lower rates of cavities. Therefore, the decision of water fluoridation (add fluoride in water) aims to reduce the prevalence of tooth decay in the U.S.

Why Are Pesticides in Our Water

Pesticides refer to the chemicals that are used to control or kill pests and protect crops. The use of pesticides is necessary in terms of food production. Globally speaking, there are over 1,000 pesticides used in farmland to ensure crops are not damaged or destroyed by pests.
Despite the importance of using pesticides in agriculture, pesticides are toxic to humans and can lead to severe health problems. Some cheap and low-quality pesticides can stay in the soil and water for years.
Because of the solubility in water, pesticides are considered one of the most commonly found water pollutants. Once pesticides make their way into groundwater, they can be transported from areas where they are applied to other places.

Health Hazards of Fluoride and Pesticides

While the amount of fluoride being added to drinking water is regulated and considered relatively safe, exposure to high levels of fluoride in the long run still can lead to acute health issues.

Though fluoride can help reduce cavities and generally be considered a necessity for oral health, exposure to high concentrations of fluoride can result in mild dental fluorosis, especially for children whose teeth are developing. Tiny white streaks or spots can appear on the enamel of the tooth, also known as discoloration.
Therefore, it is recommended to use fluoride-free water when making formula milk to prevent dental fluorosis. Any children who are under 6-year-old should not use dental products containing fluoride.
Besides the risks to our teeth, exposure to high concentrations of fluoride can also affect bone health and result in bone diseases like skeletal fluorosis. People who get exposed to excess fluoride over years, often feel pain in bones and joints. The weakened and damaged bones would be hardened and lack elasticity, which increases the risk of fractures and impaired joint mobility.

The health risks of pesticides in drinking water depend on the toxicity of the pesticide, the amount of pesticide in water, and the ways in which pesticides are exposed to people.
The high tendency of pesticides to bioaccumulate in human cell membranes can bring severe health problems by interrupting the body functioning systems.
Common health problems resulting from exposure to pesticides include immunosuppression, hormone disruption, reduced intelligence, reproductive distortion and cancer. When people get exposed to pesticides for a period of time, they often report having effects like reduced vision, headaches, salivation, diarrhea, nausea, and vomiting.

To remove the fluoride and pesticide residues in water, the two recommended methods are water distillation and water filtration. 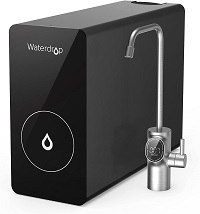 Waterdrop D6 600GPD Reverse Osmosis Water Filter System
$399.00
Waterdrop D6 system is a great RO water filter for your home. Waterdrop D6 has an efficient design that only requires one unit to operate, which means you'll spend less money in annual maintenance costs with this type of filtration technology! With regular cleaning and tuning up, it will also extend the life span significantly more than any other comparable product on market today.
You can enjoy high-efficiency filtration with just one Waterdrop D6 RO water filter system! The 5 in 1 composite reverse osmosis membrane reduces most of harmful contaminants from tap, including TDS (total Dissolved Solids), chloramine, lead, fluoride, bacteria, viruses and chlorine.

The distilled water through water distillation can bring you pure H2O without any substances. It is one of the most traditional water purification methods in history. When raw water gets boiled, it will evaporate into steam and rise up. The rising steam then will be captured by the cold container surface and condensed into pure water drops.
Though water distillation generates pure water that is 100% secure to drink, it is a time-consuming process. The average water distillation process takes about 4 to 6 hours to produce a single gallon of purified water. Besides the waiting time, water distillation can also be energy-consuming. The purification process needs a heat source to boil water and it could be very costly if you need a large amount of purified water in a certain period of time.
Newsletter Enter your email address below to subscribe to our newsletter
Categories
Popular
Countertop Water Filter System Introduction
Is Your Refrigerator Water Filter Good Enough?
How to Reduce Fluoride and Pesticides from Tap Water
Why Is Purified Drinking Water Healthier?
How The Quality of Water Affects Your Teeth
item(s) in your cart